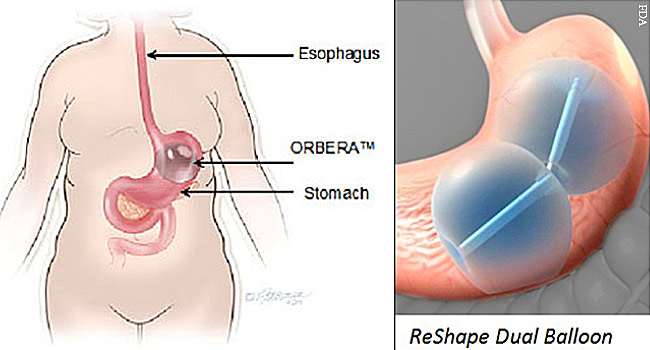 June 6, 2018 — Five more deaths are linked with weight loss balloons, bringing the total number of deaths associated with the devices to 12 since their approval in 2015, the FDA says.

The two devices involved are the ReShape, made by ReShape Lifesciences, and Orbera, made by Apollo Endosurgery.

It is the third time the FDA has issued alerts about the products, says Deborah Kotz, an FDA spokeswoman. The agency also issued alerts in February and August 2017.

In late May, the FDA put in place labeling changes to reflect the risks. “The FDA continues to work with the companies that manufacture these liquid-filled intragastric balloons to better understand the complications associated with these devices, and to ensure the product labeling adequately addresses these risks,” the FDA’s William Maisel, MD, said in a statement.
Four of the five newly reported deaths involved the Orbera device. Of the 12 total deaths, seven were U.S. patients, the FDA says. Gastric perforation, when a hole forms in the wall of the stomach, large bowel, or small intestine, was reported with four of the deaths. The perforations happened from 1 day to 3 1/2 weeks after balloon placement. It is a known risk with the procedure.

“I’m concerned, but I certainly don’t think at this point we would make any changes in our recommendation regarding safety and effectiveness,” says Eric DeMaria, MD, president-elect of the American Society for Metabolic and Bariatric Surgery.

The total number of procedures, and the number of people helped by the devices, need to be taken into account, he says.

Company Responses
Both companies said they were cooperating with the agency and that patient safety is their top concern. In a statement, Apollo says it welcomes the stronger labeling changes. It says more than 295,000 Orbera balloons have been distributed worldwide and the death rate globally is less than .01%.

Many patients with the procedure have not only obesity but also conditions such as high blood pressure or cholesterol that can also impact their health, the statement says.

In a conference call for media Monday, Dan Gladney, CEO of ReShape Lifesciences, noted that one of the five newly reported deaths involved the ReShape system. He said that patient had a gastric perforation, which was repaired. But the patient developed a blood clot in the lung while still in the hospital and died.
More than 5,000 ReShape procedures have been done since the FDA approval in 2015.
In addition to the reported deaths linked to the balloon devices, the FDA has received hundreds of other complaints over the years. Doctors, other health care providers, device makers, and the public can file reports via the FDA’s Manufacturer and User Facility Device Experience (MAUDE) database online.

Some patients report, for instance, blue-green urine. “Blue-green urine could be a sign of balloon deflation, a risk that was already known to the FDA and which appears on the product labeling,” Kotz of the FDA says.

Other known possible complications include pancreatitis, an inflammation of the pancreas that can happens if the balloon injures it, and deflation of the balloon, which could lead to bowel obstruction. The balloon could also migrate.

Options and Advice
The balloon devices require no cuts and are the least invasive of the bariatric procedures, says DeMaria, who’s also a weight loss surgeon at St. Mary’s Medical Center in Richmond, VA. A doctor inserts a gastroscope through the patient’s mouth to place the balloon and fill it with sterile saline. It then inflates, taking up stomach space. The patient is told to follow a diet and exercise program, and the balloon is removed after 6 months.

DeMaria says the device works best for people with a body mass index (BMI) greater than 30 but less than 40.

A person 5 feet, 8 inches tall who weighs 200 pounds has a BMI of 30.4. If the person weighs 270, the BMI is 41.1.
People at the lower end of that BMI range ”are supposed to have a coexisting condition,” such as high blood pressure, to be considered a candidate, DeMaria says.

Other bariatric options for weight loss are more invasive, such as a sleeve gastrectomy, which makes the stomach a fraction of its original size, and a gastric bypass, which divides the stomach and reconnects the smaller stomach to the lower end of the intestinal tract.
People who have the balloon procedures should be closely monitored, experts agree. Gastric perforation ”is not a subtle thing,” DeMaria says. Symptoms may include stomach pain, nausea, and vomiting, he says. But after the balloon is inserted, ”patients may have some abdominal pain and some nausea.”

Always consult a doctor if you are worried about your symptoms.