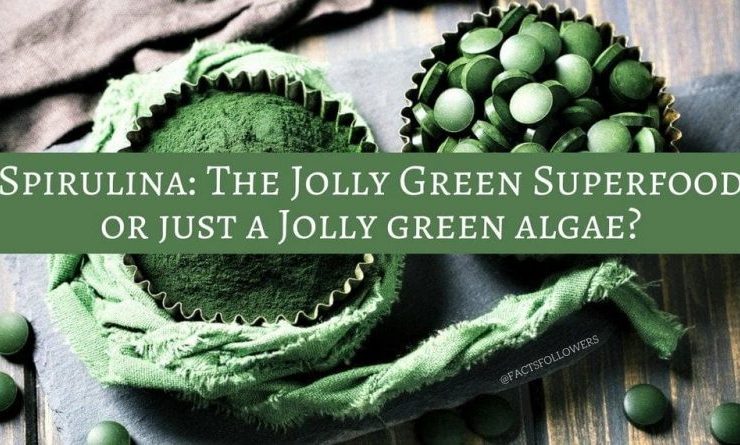 By Lauren Cox, Live Science Contributor | February 6, 2018 09:20pm ET
Spirulina is a microalgae that has been consumed for centuries due to its high nutritional value and supposed health benefits. Today, popular lifestyle personalities endorse Spirulina as a secret, potent “superfood,” and a “miracle from the sea.”
“Spirulina” sounds so much better than “pond scum,” but that’s what the popular supplement really is — a type of blue-green algae that grows naturally in oceans and salty lakes in subtropical climates. The Aztecs harvested Spirulina from Lake Texcoco in central Mexico, and it is still harvested from Lake Chad in west-central Africa and turned into dry cakes.

Spirulina was once classified as a plant because of “its richness in plant pigments as well as its ability of photosynthesis,” according to a study published in the journal Cardiovascular Therapeutics. New understanding of its genetics, physiology and biochemical properties caused scientists to move it to the Bacteria kingdom and the Cyanobacteria phylum. At first it was classified in the genus Arthrospira, but later it was placed into the genus Spirulina. There are several species, but three — Spirulina platensis, Spirulina maxima and Spirulina fusiformis — are studied extensively because of their high nutritional as well as potential therapeutic values, according to the study’s authors.

Spirulina grows in microscopic spirals, which tend to stick together, making it easy to harvest. It has an intense blue-green color, but a relatively mild taste. Aside from supplements, the U.S. Food and Drug Administration (FDA) allows manufacturers to use Spirulina as a color additive in gum, candy and other packaged foods.

Health claims about Spirulina
Many people promote Spirulina as a treatment for a range of metabolism and heart health issues, including weight loss, diabetes and high cholesterol, according to the National Institutes of Health (NIH). People may also recommend Spirulina as an aid for various mental and emotional disorders, including anxiety, stress, depression and attention deficit-hyperactivity disorder (ADHD).

Spirulina is said to help a range of eclectic health problems, including premenstrual symptoms and amyotrophic lateral sclerosis (Lou Gehrig’s disease), according to the NIH. A combination of zinc and Spirulina may help the body clear arsenic in people whose drinking water has unusually high levels, according to the NIH.

Does Spirulina work?
The NIH says there is not enough scientific evidence to determine if Spirulina is effective in treating any health conditions. However, Spirulinais rich in nutrients, some of which aren’t found in the average daily vitamin. According to the FDA, Spirulina contains significant amounts of calcium, niacin, potassium, magnesium, B vitamins and iron. It also has essential amino acids (compounds that are the building blocks of proteins). In fact, protein makes up about 60 to 70 percent of Spirulina‘s dry weight.

Nevertheless, a person would have to take Spirulina supplements all day to come close to the recommended daily amounts of the nutrients it contains, said Heather Mangieri, a spokeswoman for the Academy of Nutrition and Dietetics and owner of Nutrition Checkup in Pittsburgh, Pa. And that’s not the only issue with superfood supplements.

“There’s lots of foods that, yes, they have a lot of nutrients in them, but we don’t necessarily know the bioavailability so we don’t know how much of that nutrient you are actually getting,” Mangieri said.

Bioavailability describes how much of the nutrients you swallow are actually used by the body. In some cases, eating two different foods at once will help the body absorb nutrients better than if the person ate the foods separately. For example, Mangieri said, the leucine found in tomatoes is better absorbed by the body if you eat oil with tomatoes. Scientists are still studying the bioavailability of nutrients in individual foods, as well as how nutrients work to help prevent disease.

“As a registered dietitian, I highly recommend people get their nutrients from foods in a healthy diet because nutrients work synergistically, and that increases the bioavailability,” Mangieri said.

Spirulina to stop malnutrition
Given its high nutritional profile, scientists examining malnutrition have shown an interest in Spirulina. Several studies have looked at the effects of its supplementation among malnourished populations, including anemic pregnant women and children in developing countries with high poverty rates, according to a 2017 review published in the Journal of International Medical Research.

One such study, published in Maternal and Pediatric Nutrition in 2016, involved 87 malnourished and anemic children under age 5 from Gaza. Researchers gave half the children vitamin and mineral supplements and half Spirulina supplements for three months. The children who received Spirulina saw significantly more improvement in weight and height gain, ferritin and iron levels and hemoglobin volume than in children who received regular vitamin and mineral supplements. The authors noted the small size of the study and that more research is needed.

A year-long 2015 study published by Nutrition Journal that looked at the effects of Spirulina supplementation among nearly 200 malnourished HIV-positive people in Cameroon saw similarly positive results. The participants, who were primarily women, were given standard care, a balanced diet and Spirulina supplements, or standard care and a balanced diet without supplements. In the participants receiving Spirulina, immune system cells that are greatly reduced by HIV increased, as did hemoglobin levels.

In 2016, the government of the Indian state of Karnataka, in conjunction with JSW Energy, instituted a statewide program providing malnourished children with Spirulina supplements, according to India Corporate Responsibility and Sustainability Network. The JSW website reports a 46 percent reduction in malnutrition cases among young children, pregnant women, and lactating mothers, and scientific studies are underway to better understand the effects of this program.

Spirulina as an antioxidant
Antioxidants are compounds that help combat cell and DNA damage that leads to cancer, heart disease and other chronic diseases. The body makes some antioxidants, and others are found in food. Despite the presumed benefits of taking extra antioxidants, extensive research has not shown that taking antioxidant supplements lowers cancer risk, according to the National Cancer Institute. Taking antioxidant supplements likely won’t help other diseases such as diabetes, according to a 2011 abstract published in the journal Current Diabetes Reviews.

Since Spirulina is considered a food, it remains an open question as to whether dried Spirulina in supplements has antioxidant health benefits.

One preliminary study of Spirulina‘s antioxidant effects tested the supplement on 87 people in Kerala, India, who regularly chewed paan tobacco. Paan is prepared from the leaf of the betel tree and various spices, and is typically chewed after meals and ceremonies such as weddings and receptions. Paan tobacco chewers are at increased risk of an oral cancer called oral leukoplakia. Over the course of one year, 45 percent of the tobacco users who took daily Spirulina supplements saw a complete regression of lesions. Just 7 percent of people in the placebo group saw a complete regression in tumors in the same period, according to the 1995 abstract published in the journal Nutrition and Cancer.

Antioxidants may help athletes recover from exercise-induced oxidative stress that contributes to muscle fatigue – and Spirulina happens to contain several compounds shown to have antioxidant properties, including phenolic compounds, phycocyanins, tocopherols and beta-carotene, according to a 2010 study published in Medicine & Science in Sports & Exercise. Researchers in the study investigated Spirulina‘s possible exercise benefits among nine male recreational runners over four weeks. They found the runners showed a greater increase in exercise performance and levels of antioxidants after taking Spirulinathan they did when taking no supplements or taking a placebo. Although these preliminary findings are promising, they are too small to draw a conclusion about Spirulina‘s effect on exercise fatigue, according to the study’s authors.

Several research studies looking into Spirulina‘s effects on cholesterol and triglycerides (or hypolipidemic effects) have found Spirulina to be beneficial. However, most human trials investigating these effects have been limited to studies of fewer than 100 people, and many did not have a control group of people taking a placebo.

One 2008 study tested Spirulina‘s lipid-lowering effects on 78 adults, ages 60 and 87. The volunteers took 8 grams of Spirulina supplements, or a placebo, a day for 16 weeks. At the end of the study, there were significant reductions in cholesterol among those who were treated, according to the abstract published in Annals of Nutrition and Metabolism.

Another study of 52 adults, ages 37 to 61, examined Spirulina‘s effects on people recently found to have high cholesterol. Study participants took 1 gram of Spirulina supplements a day for 12 weeks, and gave fasting blood samples at the beginning and end of the study. By the end of the experiment, average levels of triglycerides, total cholesterol and the potentially harmful LDL (low-density lipoprotein) cholesterol decreased. However, blood pressure, weight and body mass index readings did not change, according to the July 2013 paper published in the Journal of the Science of Food and Agriculture.

Doctors now recognize that heart disease is not just a disorder of high cholesterol and triglycerides, but also a chronic inflammatory disease, according to a July 2010 review of Spirulina‘s hypolipidemic effects published in the journal Cardiovascular Therapeutics. Spirulina may then help manage and prevent heart disease through antioxidant properties, however more study is needed.

Ongoing studies on Spirulina
Medical studies are currently under way to determine Spirulina‘s effect on viral infections, swelling, wound healing and the immune system in general, according to the NIH. Preliminary studies have not shown Spirulina to be effective at treating blepharospasm, a chronic twitching of the eyelids.

There is not enough evidence to determine if Spirulina supplements can help digestion or weight loss, nor is there enough evidence to determine whether Spirulina treats memory problems, anxiety or depression, according to the NIH. Studies have yet to prove that Spirulina has any effect on energy levels and chronic fatigue. Research has not shown whether Spirulina has a meaningful effect on attention deficit hyperactivity disorder (ADHD) or premenstrual syndrome (PMS), according to the NIH.

Are Spirulina supplements safe?
Doctors consider Spirulina to be safe in general, especially in light of its long history as a food. But Spirulina may become contaminated with toxic metals, harmful bacteria and microcystins — toxins produced from some algae —if it is grown in unsafe conditions. Contaminated Spirulinacan cause liver damage, nausea, vomiting, thirst, weakness, rapid heartbeat, shock and even death. Contaminated Spirulina may be especially dangerous for children. The NIH recommends researching the source of Spirulina in supplements to ensure they are grown in safe conditions and tested for toxins.

People with certain autoimmune conditions should avoid Spirulinasupplements, according to the NIH. Since Spirulina enhances the immune system, Spirulina supplements may worsen symptoms of multiple sclerosis (MS), lupus (systemic lupus erythematosus, SLE), rheumatoid arthritis and other conditions linked to overactive immune systems. For the same reason, Spirulina may weaken the effect of immunosuppressants, which are often prescribed to treat autoimmune conditions and prevent the body from rejecting organ transplants. Spirulina may also interfere with drugs that slow blood clotting, including blood thinners such as warfarin as well as nonsteroidal anti-inflammatory (NSAIDS) pain medications. Combining Spirulina with herbal supplements that slow blood clotting may increase a person’s risk of bleeding. Such herbs include cloves, danshen, garlic, ginger, ginkgo, ginseng and turmeric, according to the NIH.

Women who are pregnant or breast-feeding should avoid Spirulina since there is a lack of safety studies in this group. People who have the genetic condition phenylketonuria should also avoid Spirulina, as it may aggravate their condition, according to the NIH. Since there are not enough studies to establish a safe dose range of Spirulina, it is best to consult a doctor and follow instructions on all supplements to avoid unsafe doses.