When Pregnancy Is a Pain in the Back 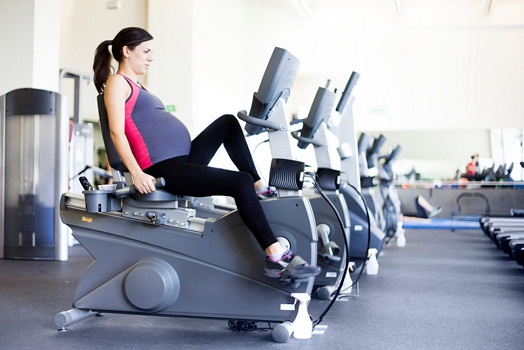 When Pregnancy Is a Pain in the Back

A WOMAN’S BODY IS IN A constant state of change during pregnancy, and the spine is no exception. The spine has a tough job of supporting our entire frame, holding it upright and maintaining a balance from our backs to our bellies. It’s no wonder that when pregnancy starts to change these things, the spine begins to undergo its own adaptations, as well. A direct result of these changes is the often-discussed pregnancy-related back pain. If you’re carrying a baby and find yourself feeling the discomfort, don’t worry. Back pain is extremely common during pregnancy, especially toward the end, as the back adjusts to compensate for the new body dynamic. In fact, 50 to 70 percent of all women encounter back pain at some point during their pregnancy.

Back pain during pregnancy typically happens at the area where the pelvis meets the spine at the sacroiliac joint, and it’s often referred to as pelvic girdle pain. Women with this type of back pain have described it as a deep stabbing pain that’s felt between the hip bones and buttocks, but others can experience the pain as more of a general dull ache in the lower back – what we call lumbar pain. Pelvic girdle pain is four times more common during pregnancy and in the postpartum period after childbirth as the body is working to return back to its baseline.

Jessica Kartalija walked into a bar and recoiled at the smell – not of chicken wings, beer or garlic fries, but of the laundry detergent on her friend’s shirt. “The sense of smell during pregnancy was insane,” recalls Kartalija, a 37-year-old news anchor in Baltimore who was pregnant (and not drinking) at the time. While many pregnant women are surprised by their powerful sense of smell, the change is normal and usually fades after the first trimester, says Dr. Jennifer Lang, an OB-GYN in Beverly Hills, California. “Evolutionarily, we think this provided women with the ability to be extra sensitive to potential toxins,” she says. Here are nine other pregnancy-related strange body changes:

It’s a cold! It’s the flu! It’s – pregnancy. Due to the body circulating a lot more fluids, including blood and mucus, during pregnancy, up to 30 percent of pregnant women experience rhinitis of pregnancy, or congestion that some women find can be eased with steam inhalation, says Lang, who authored the recent book, “The Whole 9 Months: A Week-By-Week Pregnancy Nutrition Guide with Recipes for a Healthy Start.” If your head cold is accompanied by a headache, though, tell your doctor or midwife since it could signal something more serious. “Nine times out of 10,” Lang says, “you’re going to get reassurance that these are normal, natural changes.”

Almost every time Lauren Jones-Ankarlo brushed her teeth when she was pregnant, her gums bled. “Gross … but I think [it’s] totally normal during pregnancy,” says Jones-Ankarlo, a 30-year-old tour guide and new mom in Pasadena, California. Indeed it is, thanks again to the body’s higher blood volume, which can also make pregnant women more susceptible to nose bleeds and bleeding from hemorrhoids, says Dr. Stephanie Romero, an OB-GYN and assistant professor at the University of South Florida Morsani College of Medicine. Still, it’s worth mentioning bleeding to your provider, Lang adds. “There are some serious blood conditions and things related to the liver that should just be ruled out,” she says.

Pregnant women may stay mum about their boosted libido when they’re at the doctor’s office, but “if you do a survey of friends, it’s a rather common thing,” says Lang, a mom of three. Some pregnant women even have orgasms while dreaming for the first time, she adds. While it’s not entirely clear why, feeling especially frisky with a baby on board could be due to elevated testosterone levels (particularly if you’re having a boy), higher progesterone levels that cause muscle relaxation or increased blood flow to the pelvis, which can mimic how Viagra works for men, Lang says. “Arousal states are very related to relaxation,” she says.

Not all of progesterone’s effects are welcome. In addition to being a muscle relaxant, the hormone also slows down digestion and can lead to gas, constipation and a heartburn-like feeling in the chest caused by liquids beginning to ferment in the stomach and bubbling up into the base of the esophagus, Lang says. She recommends eating a high-fiber diet full of alkaline foods like leafy greens to ward off some of the discomfort; animal products can make the issues worse. Some women find that taking papaya enzyme eases heartburn symptoms, Lang says, adding that prebiotics and probiotics can help “keep the normal bacteria population in the gut healthy.”

Notice new or changing moles, and panic that you have melanoma? That’s a connection most women (and men) have been taught to make, for valid reason. But during pregnancy, “the vast majority” of skin changes – including melasma, a benign condition in which darker patches can appear across the face – are due to the effect of estrogen on melanocytes, or the cells that form the dark skin pigment melanin, Lang says. Still, skin changes should never be ignored since it’s still possible to get skin cancer during pregnancy. “Notice it, take a deep breath and then go talk to your doctor or midwife about it,” Lang suggests.

If you’ve never noticed excess hair in your belly button, on your nipples or in the middle of your face, that might well change during pregnancy, Romero says. The hair on your head, meanwhile, can change in quality and texture, she says. Often, that’s a good thing: Many women report thicker and healthier-looking hair during pregnancy, Romero says, thanks to the halt in the hair shedding cycle. But don’t get used to your luscious locks: “After you deliver, the normal shedding kicks back in and it seems like you’re going bald,” she says, “but you’re shedding what you would have anyway.”

It wasn’t until Emily Rodenhuis’s daughter was about 1 that she learned her pregnancy had affected her eyes: “[My eye doctor] was running through the routine exam and I could tell he was puzzled about something,” recalls the 42-year-old public relations and content marketing manager in Strafford, New Hampshire. He was: Rodenhuis’s lifelong astigmatism was gone. While Romero hasn’t heard of such a reversal before (nor had Rodenhuis’s eye doctor), other vision changes – like trouble adjusting your gaze from far to near – are related to the lens of the eye losing some of its flexibility during pregnancy, she says. Looks like Rodenhuis lucked out. As she puts it: “Yay, baby!”

Forget where you put the keys again? Can’t find the right word? Your newfound forgetfulness isn’t your baby “stealing” the blood flow to your brain, as some rumors go; it’s most likely pregnancy robbing you of quality sleep, Romero says. She recommends that pregnant women cut out afternoon (or all) caffeine, avoid drinking too much water before bed and do “all the things we know are good for us” like turning off the TV before bed and sticking to a regular sleep schedule. If you’re still drained or short of breath, however, talk to your provider since it could be a sign of something abnormal like heart failure, Romero says.

During Lang’s first pregnancy, she dreamed of a girl with big eyes. During her second, she dreamed of a boy. And while pregnant with her third, she had visions of a girl’s blonde curls, despite the fact that both she and her husband have dark features. All these dreams became her reality – a phenomenon for which there’s no scientific explanation, she says. “We know and understand a fraction, really, of what’s truly happening in the body during pregnancy,” Lang emphasizes, noting that many pregnant women report vivid, memorable dreams. “There are these mysteries that are really beyond explanation, and you really just have to be in wonder of them.”