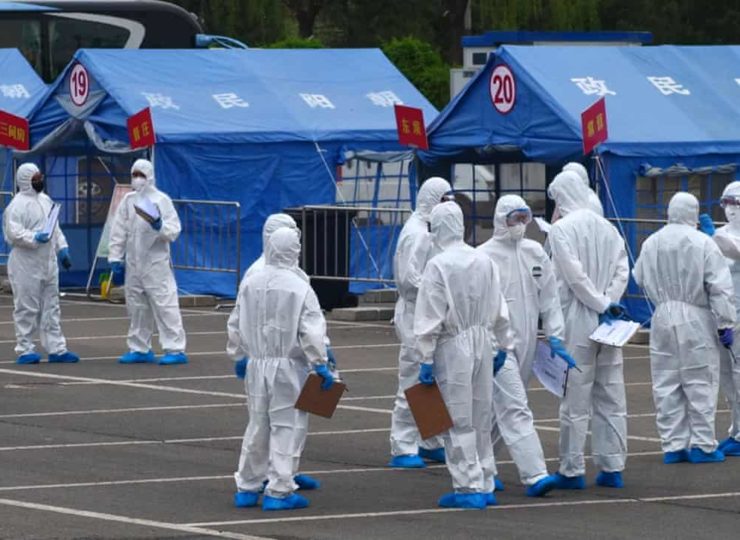 More than 232,000 people may have been infected in the first wave of Covid-19 in mainland China, four times the official figures, according to a study by Hong Kong researchers.

Mainland China reported more than 55,000 cases as of 20 February but, according to research by academics at Hong Kong University’s school of public health published in the Lancet, the true number would have been far greater if the definition of a Covid-19 case that was later used had been applied from the outset.

China has now reported more than 83,000 cases. Globally, the death toll from the coronavirus has exceeded 183,000, with the number of cases worldwide standing at more than 2.6 million.

China’s national health commission issued seven versions of a case definition for Covid-19 between 15 January and 3 March, and the study found these changes had a “substantial effect” on how many infections which were detected as cases.

It comes as China’s ambassador to the US called for “a serious rethink of the foundations” of the two countries’ relationship, while also criticising US politicians for ignoring scientists and making “groundless” accusations.

The Hong Kong study analysed data up to 20 February culled from the World Health Organization’s mission to Wuhan.

It estimated that each of the first four changes increased the proportion of cases detected and counted, by between 2.8 and 7.1 times.

“If the fifth version of the case definition had been applied throughout the outbreak with sufficient testing capacity, we estimated that by 20 February 2020, there would have been 232,000 … confirmed cases in China as opposed to the 55,508 confirmed cases reported,” the study said.

As scientific knowledge and laboratory capability evolved, the definition of a confirmed case has broadened to include cases with milder symptoms, or without epidemiological links to Wuhan or other known cases.

The report said these changes should be taken into account when looking at the rate of the epidemic’s growth and doubling times.

China has faced continual scepticism over its reporting of cases. Last week it revealed the death toll in Wuhan, where the virus is believed to have originated, was in fact 50% higher than first reported.

On Wednesday the US secretary of state, Mike Pompeo, said the US believed that China’s ruling Communist party failed to report the outbreak of the new coronavirus in a timely manner.

The US and Australia have called for an international investigation into the handling of the outbreak.Test, trace, contain: how South Korea flattened its coronavirus curveRead more

On Wednesday China’s ambassador to the US, Cui Tiankai said there needed to be “a serious rethink of the foundations of this important relationship” between the two countries. He also criticised US politicians for being “preoccupied in their efforts for stigmatisation and groundless accusation”, instead of listening to scientists.

The US, mainly via president Donald Trump, has amplified theories that the virus escaped from a Chinese lab, without evidence.

On Wednesday evening, Trump rebuked a state governor and Republican ally over his decision to reopen bowling alleys, hair salons and other businesses on Friday “in violation” of the phased federal guidelines.

Despite having voiced support for US citizens protesting against lockdowns, Trump said of Georgia governor Brian Kemp: “I want him to do what he thinks is right, but I disagree with him on what he’s doing.”

At the same press conference however there was complete contradiction between Trump and his experts over the risk of a virus resurgence later in the year.

Trump said the director of the Centers for Disease Control and Prevention, Dr Robert Redfield, had been “totally misquoted” in an article about the dangers of the virus during flu season. Redfield, standing by Trump at the podium, told reporters: “I’m accurately quoted in the Washington Post”.

Fauci said he was “convinced” of the risk of resurgence, adding: “We will have coronavirus in the fall.”