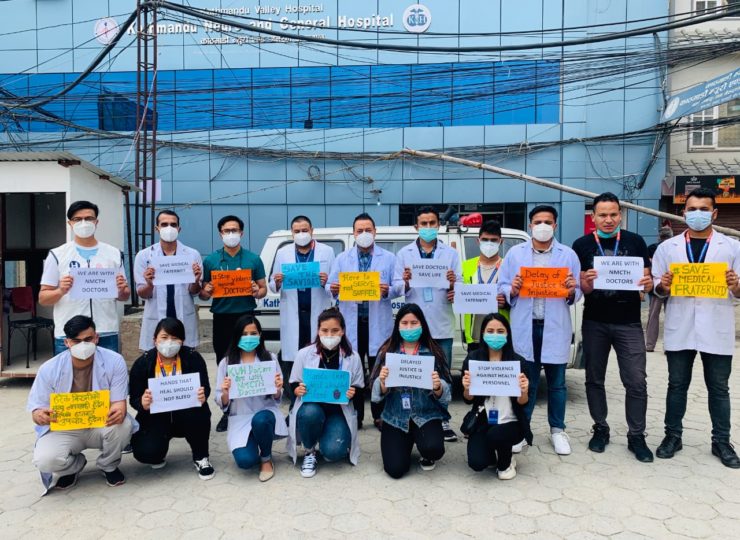 Doctors of Kathmandu Neuro and General Hospital on Thursday, protested against the attack on a doctor at Nepal Medical College in Jorpati, Kathmandu. Doctors and health workers of the hospital have strongly condemned the incident. He said that he would continue to be vigilant until legal action won’t be taken against those who mistreated doctors.

A patient who was brought to Nepal Medical College for treatment died on May 30. Doctors and health workers of Kathmandu Neuro and General Hospital carried placards against the incident saying, “Prisoner Without Bail”, “End impunity” and “Act against attack on health workers”.

Medical Officer in charge Doctors at the hospital, led by Dr. Sunil Bhandari, protested for about an hour and demanded action against the perpetrators. Consultant Physician Dr. Pratik Poudel said that it was reprehensible for a doctor working at the risk of his life to be mistreated amidst the epidemic of corona virus infection in the world.

Even though the doctors have been beaten and abused many times before, the attack on the doctors did not stopped as the government never taken action against the culprits Dr. Luza Manandhar made it clear.

They have demanded the government and medical organizations to create a conducive working environment in the workplace, protesting until the perpetrators of the current incident are brought to justice and guaranteeing the full safety of health workers.