Ethical Issues Threaten the Future of the Medical Tourism Sector? 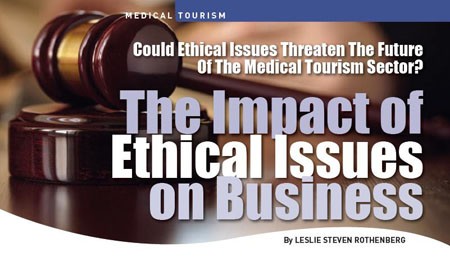 Ethical Issues Threaten the Future of the Medical Tourism Sector?

Governments, and their national ministries of health and trade, have been accused of sacrificing their public health sectors, particularly in terms of access by rural/provincial and indigent populations, in favor of attracting foreign medical tourists with attractive currencies while using public funds to facilitate that tradeoff.

How could any of these seemingly abstract, philosophical or even theological discussions about ethics affect a commercial or professional business venture? Numerous examples come to mind, including individual companies such as apparel makers Nike and Russell Athletics who have faced pressure from universities and student groups—and suspension of their university licensing agreements—over the ethical charge that they exploited low-paid workers in Honduras through the use of unethical subcontractors. [1]

It can affect the reputations of large universities (such as Seoul National University in South Korea) and even their national governments as when Dr. Hwang Woo Suk was accused of research fraud in fabricating results of his laboratory’s cloning research;[2] and the reputations of the distinguished journals, Science and Nature, that publish the research. [3]

Ethics concerns have led to the popular hostility in Germany against both scientists and companies involved in producing genetically-modified or transgenic crops. [4] Indeed, whole segments of the bioscience industry (including biotechnology, pharmaceutical, and bioagricultural companies) have struggled from time to time with various ethical criticisms. [5]

“Medical tourism” as a phrase to describe a field or an activity may be relatively new, but the activity itself dates back to antiquity when peoples such as the ancient Greeks sought what they understood to be either sacred or beneficial places for healing (for example, the territory of Epidauria believed to be the home of the god Asklepios), or Herod the Great’s health resort at the Dead Sea, or, later, the eighteenth-century spas and mineral springs in Europe—to mention but a few. There are undoubtedly examples from others parts of the world.

Those locales may have had their critics at that time, but if so, their concerns are lost in history. More recent ethical concerns voiced against medical tourism fall into several general and specific categories:

Examples of Potential Impact on Patients Engaged in Medical Tourism

Governments, and their national ministries of health and trade, have been accused of sacrificing their public health sectors, particularly in terms of access by rural/provincial and indigent populations, in favor of attracting foreign medical tourists with attractive currencies while using public funds to facilitate that tradeoff.
‍

Governments have argued that increased revenues from foreign tourists actually strengthen public healthcare, or that hospitals receiving public subsidies must provide a certain percentage of care to the poor and indigent citizens of the host country. Yet these arguments have been challenged in such countries as Cuba, [16]India, [17, 18] the Philippines,[19] Thailand, [20, 21] and those and other countries.[22]
‍

• Cosmetic or Plastic Surgery Tourism has elicited ethical concerns and represents one of the largest offerings of medical tourism. Often sold on the basis of price as part of a “vacation package” (along with dental procedures, eye surgeries, and other clinical services),[23] these cosmetic surgery packages have been criticized as (1) potentially subjecting patients to procedures in private clinics that are not accredited and by surgeons who may or may not be skilled and qualified to do the procedure, thus subjecting the patients to undisclosed potential post-operative complications, unsatisfactory results, and risks to their general health; (2) increasing those risks by enticing the patients into vacation-related activities after surgery followed by long flights home that increase the risk of developing pulmonary embolism or blood clots that can be fatal or life-threatening; (3) providing only limited follow-up care and monitoring with no continuity of care if complications arise and revision surgery is required—the costs for which may not be covered by health insurance in the patient’s home country; (4) potentially
‍

• providing no meaningful legal recourse for surgical negligence; and (5) possibly utilizing devices and products that may not meet U.S. FDA or equivalent standards for safety and efficacy—all of which factors may not be disclosed to the patient prior to surgery.[24] A review of 100 Internet websites under a search for “plastic surgery abroad” and covering services offered in Asia, Eastern Europe, and South America found “a distinct lack of information for potential patients, particularly with regard to complications and aftercare.”[25] Cosmetic tourism has also been blamed for increasing national health costs in the patient’s home countries and burdens on local plastic surgeons for complications following private cosmetic surgery undertaken outside the patient’s country,[26] as well as luring away medical practitioners from the foreign country’s public health service, thereby causing shortages in available personnel that lead to the closure of provincial public hospitals; providing private medical services that local citizens cannot afford; and, at the same time, promoting Western aesthetic values that cause women in that country to want those same procedures in order to look beautiful as judged by those same aesthetic values.[27] Cosmetic surgery is currently available in dozens of countries throughout the world.
‍

• Another set of ethical concerns surrounds what has been labeled “transplant tourism,” those countries [identified in the past as China, Colombia, India, Pakistan, and the Philippines][28, 29] offering organ transplants to international patients under circumstances in which the source and circumstances surrounding the procurement of donor organs has been criticized.[30, 31] The past criticism of Chinese donor organs was the claim that they often were obtained from executed prisoners,[32] but new laws and regulations governing hospitals conducting organ transplants as well as prohibiting any trading in human organs (but perhaps not explicitly addressing the executed prisoner issue) went into effect in China in 2007.[33] The criticism in Colombia, India, Pakistan and the Philippines dealt with the alleged purchasing of kidneys from poor citizens who became live organ donors.[34, 35] There is a related criticism of “organ tourism” that alleges a history of increased morbidity and mortality of foreign patients who have been transplanted with donor kidneys purchased in such countries that is not disclosed to prospective recipients.[36,37]
‍

• A different set of ethical concerns has been directed at what is sometimes labeled “reproductive” or “procreative” tourism (infertility treatment), but what a leading ethics writer on this topic, Prof. G. Pennings of Brussels, prefers to call “cross-border reproductive care.”[38] The range of expressed concerns are directed both on behalf of the surrogate mothers from the host nation as well as the tourists and include: (1) limits and the quality of medical and social care available to surrogates both prior to and following delivery of the surrogate child, (2) remuneration of the surrogate is alleged to likely be below global market rates for such services; (3) selective reduction [termination of pregnancy, abortion] is a common occurrence in assisted reproductive technology (ART), but may present cultural or religious concerns for the surrogate; (4) potential conflict of interest for the physician who is expected to be a medical advocate for the tourist but may also need to be an advocate for the surrogate; (5) separate sets of informed consent issues for both tourists and surrogate [with regard to the latter, e.g., the societal impact of a surrogate carrying a fetus for two gay men, a husband’s tolerance of his wife carrying another man’s baby, religious concerns, etc.]; and (6) the frequent unavailability of these services to infertile couples in the host country.[39]
‍

• Various forms of experimental, often scientifically unvalidated treatments, including stem-cell therapy, that are allegedly marketed to desperate patients who can afford the tourism involved, have been the subject of ethical criticism and yet are a growing part of the medical tourism sector.[40] The ethical issues with regard to these therapies include (1) providers making inaccurate medical claims in their direct-to-consumer promotional materials; (2) patients not receiving adequate and appropriate information and thus shouldering inordinate risks; (3) clinics contributing to public expectations that exceed what the field can reasonably achieve; (4) patients subjected to excess financial burden; (5) clinics not following international or national guidelines for the provision of stem cell-based treatments; and (6) inadequate patient informed consent, including patients suffering serious treatment side effects that allegedly were not disclosed in advance.[41,42,43,44]

• Some writers have urged health insurance plans to not discriminate explicitly or implicitly against medical tourism by making their coverage neutral as to provider location and reimbursing travel costs,[45] and some U.S. health insurers are initiating pilot programs to cover medical tourism, often in response to both employer and employee interest in cutting costs.[46,47,48] The American Medical Association (reflecting both the interests of its physician members as well as concern for their patients) in 2008 issued medical tourism guidelines and promised to support model legislation in U.S. states that would force health insurers to adhere to certain principles.[49]
‍

If A Perceived Problem Exists for the Medical Tourism Sector, What Possible Solutions or Future Scenarios Exist?

Why Bother With These Ethical Concerns?

The medical tourism sector is a growing, financially successful international reality, and one can reasonably ask why there is any need, at this stage of its development, to grapple with the type of ethical concerns that have been mentioned in this article. Aside from the observation that healthcare has often been viewed by society as requiring a higher standard of behavior than other forms of business activity, there may be a more fundamental, self-interested reason for engaging in this process.
‍

“It is hard to argue that managers should not embrace the spirit rather than the letter of the laws that govern their enterprises. As Warren Buffett reminded Salomon Brothers’ employees after he took over the troubled firm, there is plenty of money to be made by playing well within the lines. And the importance that managers should place on greater transparency and disclosure to all stakeholders was brought painfully home by the collapse of firms like Enron and WorldCom. As Supreme Court Justice Louis D. Brandeis put it: ‘Sunshine is the best disinfectant.’ The economic value of that sunshine is evident in the higher cost of capital in economies that lack it.”[50]
‍

[9] Kassim PNJ. Cross-border issues in the development of medical tourism in Malaysia: legal challenges and opportunities. Medicine and Law. 2009; 28:439-50

[13] N. Cortez. Patients without borders: the emerging global market for patients and the evolution of modern healthcare. Indiana Law Journal. 2008; 83:71-132.

[28] Shimazono Y. The state of the international organ trade: a provisional picture based on integration of available information. Bulletin of the World Health Organization. 2007;85:955-62.