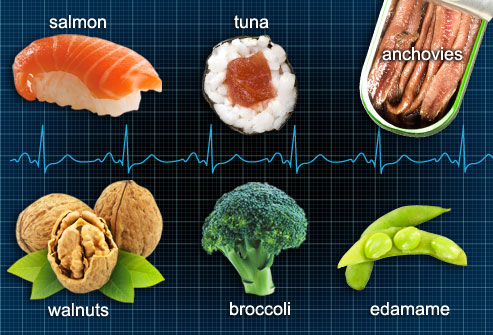 Helping Your Heart’s Rhythm
Omega-3s seem to have a stabilizing effect on the heart. They can lower heart rate and help prevent arrhythmias (abnormal heart rhythms). Several common sources of omega-3s are fish, walnuts, broccoli, and edamame (green soybeans that are often steamed and served in the pod).

Cutting Triglycerides
Omega-3s DHA and EPA can lower your triglycerides, a blood fat that’s linked to heart disease. Talk with your doctor before taking omega-3 supplements, because some types can make your “bad” cholesterol worse. You can also bring down triglyceride levels by exercising, drinking less alcohol, and cutting back on sweets and processed carbs like white bread and white rice.

Lowering High Blood Pressure
Omega-3s can help lower blood pressure, a bit. One plan is to replace red meat with fish during some meals. Avoid salty fish, such as smoked salmon. If you have high blood pressure, limiting salt is probably one of the things your doctor has recommended.

Do They Help Prevent Stroke?
Omega-3 foods and supplements curb plaque buildup inside blood vessels, helping with blood flow. So they may help prevent stroke caused by clots or a blocked artery. But at high doses, omega-3 supplements might make bleeding-related stroke more likely; so check with your doctor.

Useful for Rheumatoid Arthritis
Studies suggest omega-3s can curb joint pain and stiffness in people with rheumatoid arthritis. A diet high in omega-3s may also boost the effectiveness of anti-inflammatory drugs.

Depression and Brain Benefits?
Depression is rarer in countries where people eat a lot of omega-3s in their typical diet. But omega-3s aren’t a treatment for depression. If you’re depressed, talk with your doctor about what might help you feel better.

May Help With ADHD
Some studies suggest omega-3 supplements may ease the symptoms of ADHD. Omega-3 fatty acids are important in brain development and function. Omega-3s may provide some added benefits to traditional treatment, but they don’t replace other treatment.

Research on Dementia
The jury is still out, but there’s some evidence that omega-3s may help protect against dementia and age-related mental decline. In one study, older people with a diet high in omega-3 fatty acids were less likely to get Alzheimer’s disease. More research is needed to confirm the link.

Omega-3 and Children
Be wary of promises that omega-3s have “brain-boosting” powers for children. The Federal Trade Commission asked supplement companies to stop that claim unless they can prove it scientifically. The American Academy of Pediatrics does recommend that kids eat fish, but cautions against types that are high in mercury, such as shark, swordfish, king mackerel, and tilefish.

Catch of the Day
The best source of omega-3 fatty acids DHA and EPA is fish. Some varieties deliver a higher dose than others. Top choices are salmon, mackerel, herring, lake trout, sardines, anchovies, and tuna. The American Heart Association recommends at least two servings a week of fish. A serving is 3.5 ounces of cooked fish or 3/4 cup of flaked fish.

Try Tuna
Tuna can be a good source of omega-3. Albacore tuna (often labeled “white”) has more omega-3 than canned light tuna, but it also has a higher concentration of mercury contamination. The amount of omega-3 in a fresh tuna steak varies, depending on the species.

Avoid Contaminated Fish
Due to its important nutrients for growth and development, and low intakes the FDA changed from limiting fish consumption to encouraging it. For most people, mercury in fish is not a health concern. But the FDA has this advice for young children and for women who plan on becoming pregnant, are pregnant, or are nursing:

Eat 8-12 ounces of fish per week (which is equal to 2 or 3 servings a week). Provide kids age-appropriate portion sizes. Limit albacore tuna to 6 ounces per week.
Choose fish lower in mercury, such as salmon, shrimp, pollock, tuna (light canned), tilapia, catfish, and cod.
Avoid shark, swordfish, king mackerel, and tilefish, and limit albacore tuna to no more than 6 ounces a week.
When eating fish caught locally, check fish advisories or limit fish to 6 ounces for women and 1-3 ounces for children and do not eat fish for the rest of the week.

Omega-3 Supplements
If you don’t like fish, you can get omega-3 from supplements. One gram per day is recommended for people with heart disease, but ask your doctor before starting. High doses can interfere with some medicines or increase risk of bleeding. You may notice a fishy taste and fish burps with some supplements. Read the label to find the amounts of EPA, DHA, or ALA you want.

Vegetarian Sources of Omega-3s
If you don’t eat fish or fish oil, you can get a dose of DHA from algae supplements. Algae that is commercially grown is generally considered safe, though blue-green algae in the wild can contain toxins. Vegetarians also can get the ALA version of omega-3 from foods such as canola oil, flaxseed, walnuts, broccoli, and spinach — or products fortified with omega-3s.

Avoid the Omega-3 Hype
Many food products now boast that they have added omega-3 to support various aspects of your health. But be aware that the amount of omega-3 they contain may be minimal. They may contain the ALA form of omega-3, which hasn’t yet shown the same health benefits as EPA and DHA. For a measured dose of omega-3, taking fish oil supplements may be more reliable.